The Legend Continues, Mobile Legends: Bang Bang Professional League – Philippines is Back for a Third Season 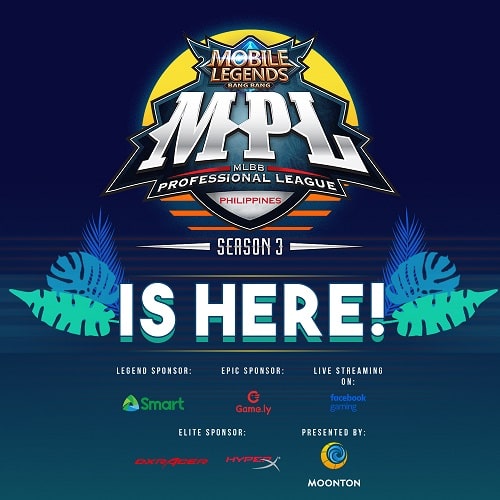 MANILA, Philippines – On February 27th, 2019, Mineski formally announced the return of Mobile Legends Bang Bang Professional League – Philippines (MPL-PH) for its third season as the biggest, professional league competition in the country at High Grounds Café in Quezon City. The weekly tournament brings all the best players from Luzon, Visayas, and Mindanao to battle for supremacy and a massive prize pool of USD 100,000, with the overall champion taking home the largest cut, USD 25,000.
The announcement comes after the exciting conclusion of MPL-PH Season Two, that saw the ultimate underdogs, Cignal Ultra, takedown tournament favorites, BREN Esports, for the championship!
“The Philippines has the second biggest users of Mobile Legends. This is why we started MPL here in the Philippines,” says Mr. Jingjei Lin, E-sports Manager for Moontoon, developers of Mobile Legends Bang Bang. “We can confidently say that MPL is one of the biggest e-sports leauges in the Philippines and I’m proud that we will be having the Mobile Legends Bang Bang Southeast Asia Cup in Manila!”
The tournament’s two best teams will advance to the Mobile Legends: Bang Bang Southeast Asia Cup 2019 (MSC-2019) in Manila following the conclusion of MPL-PH Season 3. This international tournament brings the best teams from the Philippines, Indonesia, Malaysia, Singapore, Myanmar, Thailand, Vietnam, Cambodia, and Laos.
Make no mistake, there is more at stake than a shot at the grand finals! The third season will feature the top six teams from the league’s second season, along with four new teams that advanced from the open and main qualifier stages. Each team will receive weekly salaries throughout the group stage. The player that achieves legendary status will receive the Regular Season MVP title and a generous cash bonus.
“We are proud to be working with Moontoon and we always try to provide the best e-sports experience not just for the players but also for the viewers,” shares Mr. Jhudiel Lopez, Season 3 Project Manager. “This season, we are going to be more intimate and we want to see the struggle and victories of the players from their point-of-view. We want to give people good stories. I think Mobile Legends Bang Bang is a good avenue for the e-sports experience since a lot of people are playing it. I wish all the teams good luck!”
TEAMS DIRECTLY INVITED
● Cignal Ultra
● BREN Esports
● SG Dragons
● Evos PH
● Aether Atlas
● Execration

The Third Season of the MPL-PH will officially start on March 23rd, 2019. The matches will take place every week until May 5th, 2019, when only two teams remain to advance to the grand finals! The entirety of the league will be streamed live on Facebook Gaming, the official live streaming platform of the MPL-PH Season 3.
The league would not be possible without the express cooperation of Smart as the official Legend sponsor and Game.ly as the league’s Epic sponsor. Dxracer and HyperX have both committed to supporting the Mobile Legends: Bang Bang Professional League Philippines Season 3!