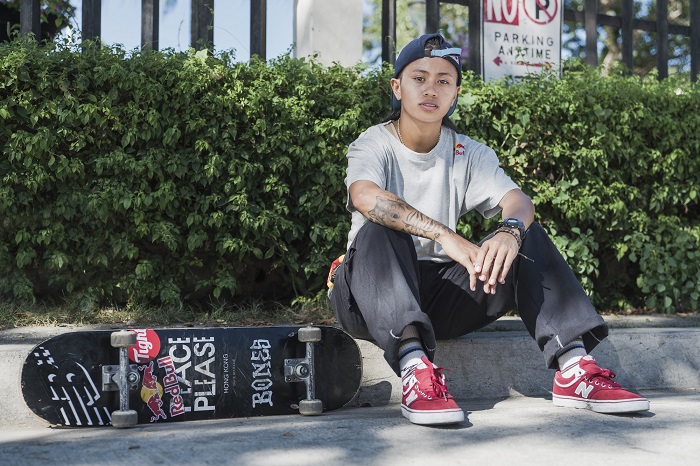 “Last December 2014, I had a very severe ankle sprain that didn’t seem to get better,” reveals Didal. “Until recently, it affected my skating because I kept thinking it might happen again.”

Her assessment included a series of exercises that improved her flexibility and core reflexes, which allowed her to build up confidence. In addition, Didal worked on fine-tuning her trick executions.

“The best part about them (Red Bull) is when they would torture me during rehab,” joked Didal. “But really, they have the best team, therapist and equipment. They helped so much – especially with my ankle concerns and other key areas. Now we’re focusing on a lot of ways to improve my skills.”

With a top-10 finish at the SLS World Tour, Didal has her sights set on a podium finish at this year’s SEA Games in order to secure her place at the 2020 Tokyo Summer Olympics.

“I’m always prepared and ready to compete, no matter where it is. That’s why I recently spent time in Rio de Janeiro/Los Angeles to get the best place training possible. I’ve also got some new tricks prepared but will stick to the game plan.”

Inspiring Future Generations
Spending her early years borrowing skateboards in order to practice around abandoned building and the bustling streets of Cebu, Didal was able to build up her prominence, find the right sponsors like New Balance that helped her secure spots in major tournaments around the world.

Regarded by Time Magazine as one of the “25 Most Influential Teens of 2018”, Didal took home the gold medal at the 2018 Women’s Street Skateboarding Event at the Asian Games. She is also the first Filipino of any gender to compete at the X-Games.

With a series of historic accomplishments, Didal has established herself as one of the top skaters in the world today. And as such, she has become an influential figure among aspiring athletes in the Philippines.

I’m honored to be an inspiration to the next generation of skaters,” Didal admits. “In the future, I am keen on doing more projects like clinics to share with them what I’ve learned.”

About Red Bull
Red Bull gives wings to people and ideas. As a functional beverage, we give wings to our athletes by vitalizing body and mind – supporting their dreams and aspirations through their passions like skateboarding.