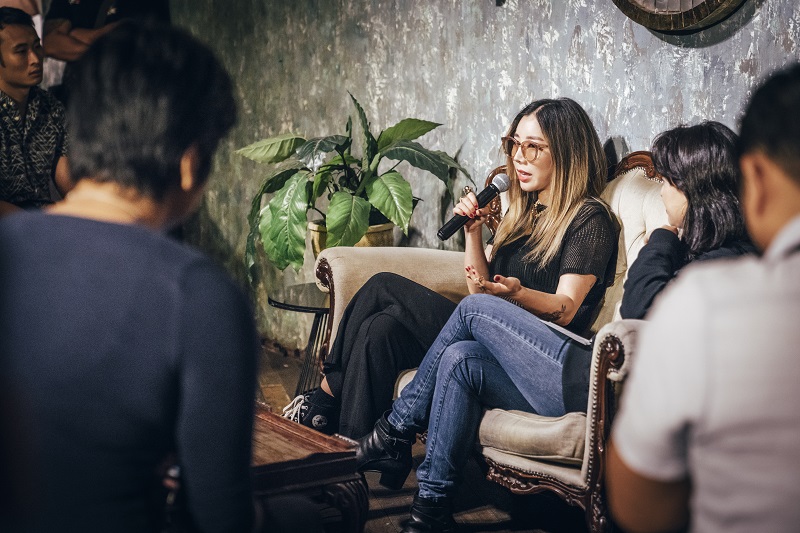 Resilience is Everything: A Conversation with TOKiMONSTA

(July 13th, 2018) MANILA, Philippines – Red Bull Music Academy alumni, TOKiMONSTA (Jennifer Lee) returned to Manila for an intimate discussion at 20:20 Nightclub in Chino Roces, Makati City. The discussion was followed by a hotly energetic performance at the nearby XX XX. For Lee, it was a chance for her to sit down and share her insights with a handful of aspiring, young musicians and producers.

“It’s cool! It’s crazy to think that I have any knowledge to impart to anyone else,” Lee shared. “If I share my experiences with you, then you guys can use that as a short-cut to evolve yourself more as human beings. In 2010, I got to sit in the audience and watch artists I respected speak to me. It helps fast-forward my perspective through their experiences. Now I get to sit up here and share with you guys, and hopefully, you guys will get to be up here and share with the next generation.”

A native of Los Angeles, California, Lee was raised as a classically trained pianist and would begin creating beats during her time in college. In 2010, she was invited to London for the Red Bull Music Academy. In the time since, Lee has released a string of successful albums under the name, TOKiMONSTA.

“I think that when you make something personal as music, you’re not making it for other people,” Lee began. “You’re making the music as an expression of yourself and your own creativity. And it’s very vulnerable. You’re sharing some part of yourself that’s expressive. When you go to different countries and you see that people are resonating with your music, that means they resonate with a very deep side of you. I’m really humbled by it. And I get to see people also enjoy the music that I make and the shows that I perform. It’s a shared experience by all these different cultures. You start to see this commonality between everyone.”

Lee discussed her creative process, which the artist admitted that the creation of any piece of music compels total vulnerability. “When you’re vulnerable, you’re trying to show a part of yourself that’s not inhibited. And in a lot of ways, we are all susceptible to trends and influences. It’s very risky to be vulnerable. It’s very risky to express yourself in a way that shows everyone something different. The vulnerability is very much hand-in-hand with being unique and having a unique sound.”

This allowed Lee to really share the inner workings of her creative process. “Focus is really a point of contention. The commonality is that creatives tend to be very unfocused people, you know? I can’t force myself to make music if I’m not in the mood to do it. None of the music that comes out will sound inspired. So I can take upwards of several weeks not making any music, but then once inspiration hits, I’ll lay down five tracks in a week. And once I start a song, it’s very easy for me to discover that I’m very motivated to finish. I’ll work for about eight hours straight. That’s just the way that I work, everyone is different. You can’t force the focus, I guess. You just have to be inspired!”

While the creation of music is often the most attractive aspect of the job for many musicians, the process of putting their music out there can be very demanding.

“You have to learn to be comfortable with yourself, because what are you going to do with all this music if no one can hear it? It’s all relative”, said Lee. “Social media is a great avenue for self-promotion in a way that wasn’t available to people twenty years ago- it was all record labels. Now if you’re on SoundCloud and you’re making really good music, you can find avenues to share your music with other people.”

As far as Lee is concerned, surviving as a successful musician in the 21st century means becoming a lifestyle brand in-and-of-your own body of work. “Music has become a lifestyle brand. You as an artist aren’t just the music that you make. You’re your music, you’re your personality, taste in artwork, preferences, you share so much of yourself (on social media).”

Ultimately, as Lee revealed, the secret of every successful artist is resilience. “Resilience is everything. If you’re not resilient, every blow is going to hit you so much harder. A lot of it isn’t always awesome. The circumstances of our environment, the county that we live in, the people were around, it’s not always going to be great. At the same time, there are tons of things that are amazing. It’s not easy, but it’s finding that inner power in yourself – that confidence and that drive. But understand it’s okay to feel all these emotions. But you can’t hold on to them. You can’t sulk.”

As a female Asian-American artist in her genre, Lee’s career as TOKiMONSTA has been filled with a number of challenges, “The challenge has changed over the years. At the very beginning, I wasn’t very common. But my music was up to the standard of my male peers and all my male peers respected the music that I made. And even though I don’t set out to be an example, as an Asian female, I want to show that I’m making decisions. I want to be normal. I want to make music on the same level for everyone else.”

The biggest challenge for Lee, however, was returning to the stage after her battle with Moya Moya disease, a neurological disease that required Lee to undergo two surgeries that temporarily impaired her ability to communicate and make music.

“As time passed, the memory of how do things came back to me. So when I started going back out and playing shows, the most challenging part was the more emotional and mental part,” Lee shared. “I had isolated myself from everyone for two months. I had social anxiety. I couldn’t stay out for a long time.  I became very sensitive. To go from not seeing everyone for a while, to a very traumatic experience, to playing in front of 20,000 people at Coachella, it’s quite a big schism to cross.”

For Jennifer Lee, the process of creating a song isn’t just about capturing a single moment or an emotion. It’s about creating an experience, an adventure told through rushing bodies across the dancefloor.

“I do hope that whenever people listen and come to my shows, they understand my intentions for the experience. Not my intentions for them as individuals,” Lee began. “Again, there’s this sense of relating to each other, that we can understand the feeling and emotions in the music. What’s meant to be more sensitive or hyper, you can understand that those were the moods that I was in. I want the music to be cathartic for myself and I want to share it with you, in case that it might bring you some peace.”

Yet, despite all her success, Lee is aware that her music is not for everyone. And that’s something she has shown comfort in.

By combining her passion for creating musical experiences to her “never give up” attitude, Jennifer Lee/TOKiMONSTA has become one of the most widely respected acts in her genre. As an alumnus of the Red Bull Music Academy, Lee continues to travel all over the world to share her music and her knowledge with the next generation of producers.

The Red Bull Music Academy is a global music institution committed to fostering creativity in music. We celebrate music, its culture, and the transformative minds behind it.

Begun in 1998, the Academy has taken the core principles that underlie its annual workshop for selected participants and applied this curatorial approach to lectures and events throughout the year. For more information, visit redbullmusicacademy.com and follow instagram.com/rbma | twitter.com/rbma