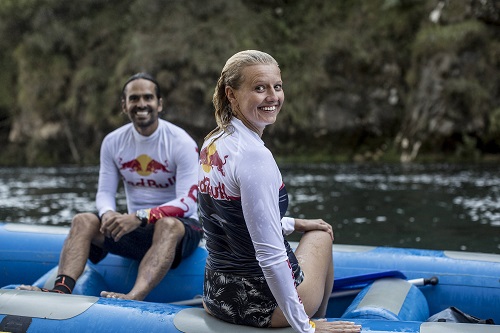 After a short question and answer session with the nation’s leading news outlets, the divers gave a glimpse of what to expect at the first stop of the 2019 Red Bull Cliff Diving World Series in El Nido.

“It’s a big challenge of mine to break my personal best again,” says Rhiannan Iffland. “Scoring consistently higher at each event is the one thing I want to focus on this year.”

As a veteran of the sport, Duque’s goal for this 2019 season is a bit more conservative, stating that he wants to “just hang in there one more season and then say goodbye.”

Xantheia Pennisi, the 1st competitor of Filipino descent to compete in the Red Bull Cliff Diving World Series, is excited to be back in the Philippines after 7 years. A newcomer to the sport, Pennisi is ready to showcase her skills in front of her family, stating “I feel very special to be representing Australia and the Philippines.” She goes on to say, “My goal is to place in the top 5 at all the competitions. I know my Filipino family are all supporting me, and I want to dive for them and make them proud.”

Smart, Duque, Iffland, and Pennisi then took the time to share their knowledge with members of the Philippine National Diving Team for an in-depth diving workshop. This allowed members of the National Team to improve their takeoffs and dive executions by learning from four of the world’s most decorated high divers.

“We’re excited to share the morning with Orlando, Rhiannan, Xantheia, and Eleanor,” shares Marie Dimanche, Chairman of the Philippine National Diving Team. “Having an international event of this scope in the country will go a very long way in recognizing high diving as a premier sport.”

The upcoming 11th season of the Red Bull Cliff Diving World Series opens in El Nido, Palawan, on April 12th, 2019, in Miniloc Island’s Big and Small Lagoons. Twenty-four (24) professional male and female divers from eighteen (18) countries will take off from breath-taking heights of up to 27 meters with only their concentration, skill, and physical control. El Nido will mark the first and only stop in Asia on this year’s tour.

Catch the live broadcast from El Nido on Red Bull TV, Facebook and YouTube on April 13th, 2019. Viewers in the Philippines may also watch the full event, along with the remaining six stops of the 2019 World Series, on S+A and iWant Sports (iwant.ph), 5PLUS and 5plus.com.ph, FOX Sports, FOX Sports GO, FOX+ app, online at http://www.foxsports.ph, and on iFlix VOD service.