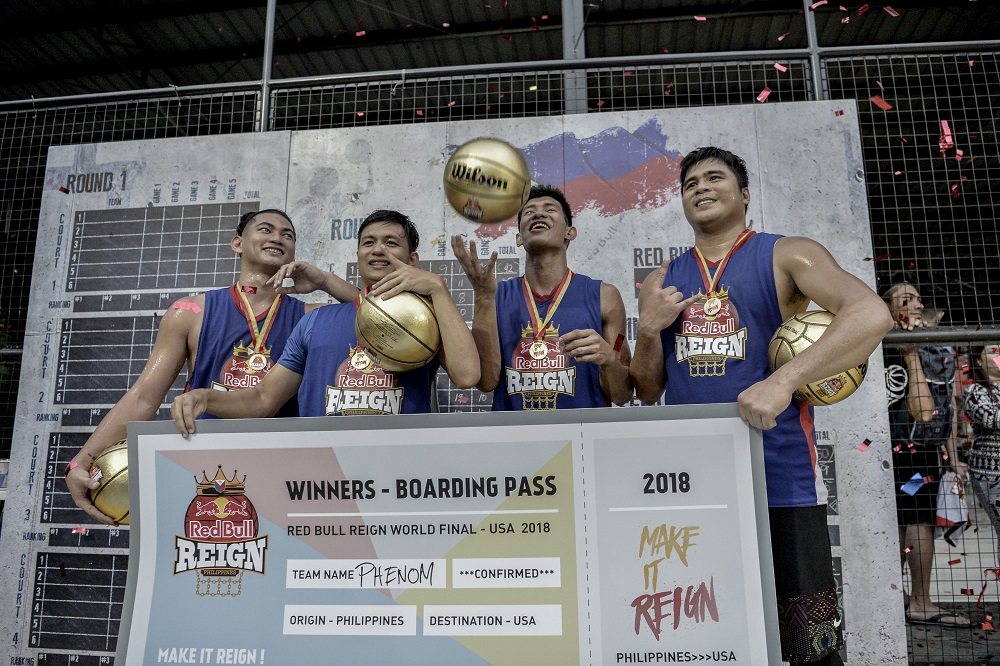 (MANILA, Philippines) – On Saturday, June 30th, 2018, sixteen teams, finalists from the previous Qualifiers (Manila A, Manila B, Last Chance), went head-to-head at the Red Bull Reign Finals at Taft Food by the Court in Pasay City. Phenom emerged as the tournament winners and earned the chance to represent the Philippines at the Red Bull Reign World Finals.

Red Bull Reign is a high-endurance, offense-driven 3×3 basketball tournament that gathers the world’s top ballers to battle it out for the chance to compete at the World Finals in Washington, DC, USA. The rules are simple: the team that scores the most overall points in each round will advance until only one team remains.

The final sixteen teams consisted of:

The event kicked off with the Last Chance Qualifier that enabled Phenom to advance to the Finals later that afternoon. Over the course of the day, each team collided in a series of round-robin style matches, intensified by familiar players like former NCAA player from Lyceum of the Philippines – Seraj Elmejrab of team PACITA, former UAAP player from UST Growling Tigers – John Jordan Sta. Ana of team Phenom, and Senior Board Member of Ilocos Norte – Matthew Marcos Manotoc of LGU.

“It’s super robust. Everywhere, you have people playing basketball – old to young, good to not very good, it’s always been a very healthy basketball scene,” says Manotoc. “Probably one of the most vibrant in the world, very proud of the basketball scene, and Red Bull Reign is just a testament to that.”

Red Bull Reign progressed into the semi-finals, which saw three rounds of competitive back-to-back contests between Phenom, Souldier, and LGU.

Despite delays due to the weather throughout the day, Phenom and LGU later advanced to the finals with a score of 46-to-50. Both teams collided on the court but Phenom would emerge as the Philippine Champions, at a score of 10-to-06. The winning team included team captain, Carl Kenneth Sumalacan, Jarrold Flores, John Rom Alvarado, and John Jordan Sta. Ana.

“Today was extremely difficult, it was as if we went through the eye of a needle. They were all skilled and hungry to win,” shares Sumalacan. “We are happy and at the same time, excited. We were constantly worn out, but it was all worth it.”

“We’re really trying to get bigger and better every year. And I think we’re definitely doing that,” says Hizon. “Red Bull truly made a big presence here and what’s nice is the homegrown presence. So hopefully, Phenom represents us well in Washington D.C., and we’re praying for the best.”

According to sports consultant, Al Delos Reyes, “What’s good about Red Bull Reign is that it opens another door for amateurs who, even though haven’t been part of any basketball professional leagues, get the chance to represent the Philippines against 60+ countries. And it’s on, Phenom is flying to Washington, D.C. later this year!”

Following their hard fought victory at the second annual Red Bull Reign, Phenom will represent the Philippines at the World Finals in Washington DC, USA, later this year.