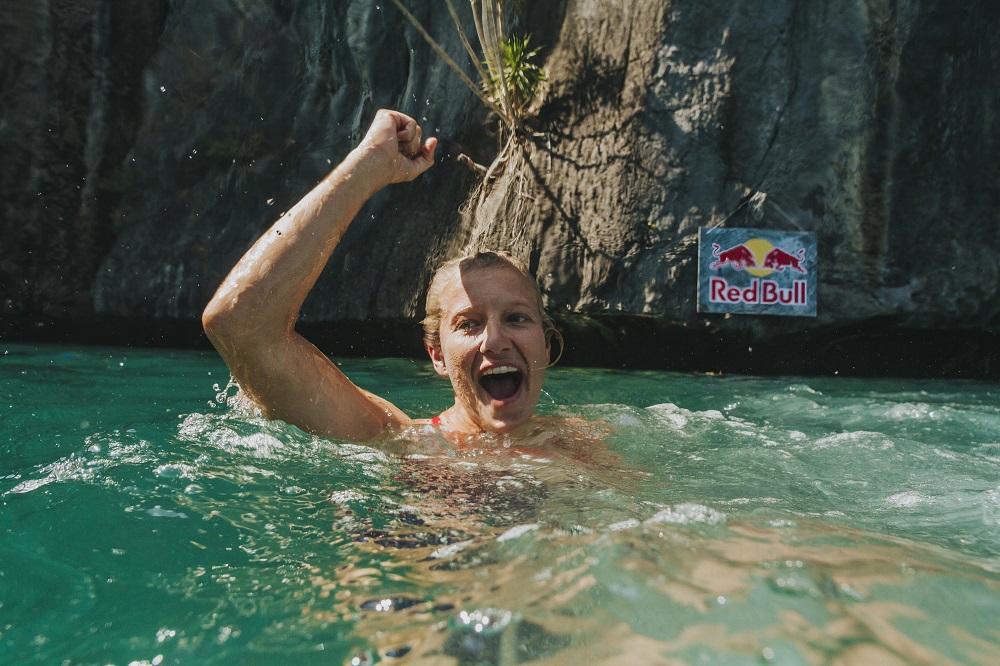 Perfect start for reigning cliff diving champions in the Philippines

After winning the final four stops last year, 7-time champion Gary Hunt began this season where he left off – the brilliant Brit is unbeaten in five competitions across seasons. In El Nido’s beautiful lagoons Romania’s Constantin Popovici edged the leader after three rounds, Jonathan Paredes from Mexico, out of second place in his first competition as a permanent diver from 27 metres.

No surprises for the women in the season opener. Three-time champion Rhiannan Iffland got off to a flyer in this unspoilt location off the Philippines’ Palawan Island. Yana Nestsiarava from Belarus equalled her best-ever finish in second place, with Canada’s Lysanne Richard completing the podium.

With a pair of 10s for Paredes’ first dive of the season, the Mexican launched immaculately from the rocky off-the-cliffs spots above emerald green lagoon waters, taking the lead into round four. However, it was in this final round when Popovici’s impressive armstand dive earned the Romanian the high score of the day and his first ever World Series podium, just 1.35 points ahead of Mexico’s style master. It was record winner Hunt, though, who nailed his final dive to stay unbeaten with his dive list for a fifth time.

Over to the women’s and Iffland, the sport’s most decorated female athlete, surprised herself by winning for the 12th time in 18 events. Sitting in third after two rounds from the rocky launchpads in the Small Lagoon, the 27-year-old showed no nerves with the best dive in the final round to keep her contenders in check and continue her winning form from 21 metres. Under the scorching Philippines sun, it was Belarusian Nestsiarava, the surprise leader before making the way over to the platforms for the more complex dives, who came closest to the Australian. Canada’s Richard, at 37 the most experienced permanent diver in the women’s, secured 3rd place to make it 10 career podiums.

Women’s wildcard, Xantheia Pennisi (AUS/PHI), kicked off the 2019 season with strong showing in-front of a hometown crowd. Pennisi, who is the first-ever Filipino athlete to compete in the Red Bull Cliff Diving World Series, managed to better her standing after each round finishing 7th overall.

In this, the remotest of locations, the divers were tasked with kayaking, rock-climbing and traversing ladders before they even reached their take-off positions. Once on their platform the phenomenal views across the lagoons were certainly worth the effort.

Untouched limestone formations, natural colours, coral and fish were the stunning scenery as the world’s best cliff divers kicked off the new season in paradise with a display of diving grace. From here they move on to chillier waters in Dublin, Ireland for the second new stop on the calendar in a month’s time.

Quotes from the winners

I knew it was going to be a tough competition. Constantin pushed me right until the edge and that’s been like that for a couple of competitions now. I know it’s not going to be easy, but that’s one.

I want to be diving against the best people in the world and here is where I can do that. I don’t want to be just on my own. It’s much more fun when it’s a fight.

A wonderful location. When you think of cliff diving you think of a place like this. We found some really great places and what better way than come away with a win.

Super happy and a bit surprised as well. I was standing up there and thought the win is a bit out of my reach, but I do like that extra bit of pressure. It definitely helps me when I’m out on the platform. It helps me to stay calm and collected and enjoy what I do. Super stoked and kind of out of words.

Some say it’s not easy, but I actually really enjoy diving off the cliffs; I love being out in nature and I love the extra adrenaline you get standing up on the cliffs. It shows a little bit more versatility with the dives also, so I’m excited that we have two more stops with off the cliffs dives coming up this season.

Since 2009, the Red Bull Cliff Diving World Series has provided a platform for aesthetic free-falls and dives of ever growing complexity, spotlighting the sport’s finest athletes as well as the most promising talents and in 2014 it introduced a Women’s World Series. In its 11th season, the sport’s best athletes will once again leap, twist and somersault from breathtaking heights with no protection, except their concentration, skill and physical control during seven demanding competitions around the world. Between April and September, this pure extreme sport will hit waters in natural and urban environments as well as remote and iconic venues at oceans and rivers across Asia, Europe and the Middle East to crown two new champions.

The Red Bull Cliff Diving Newsroom is the central hub for all World Series content and will be updated through out the event week and is free for editorial use for all media channels including television, film, print, mobile, and digital.