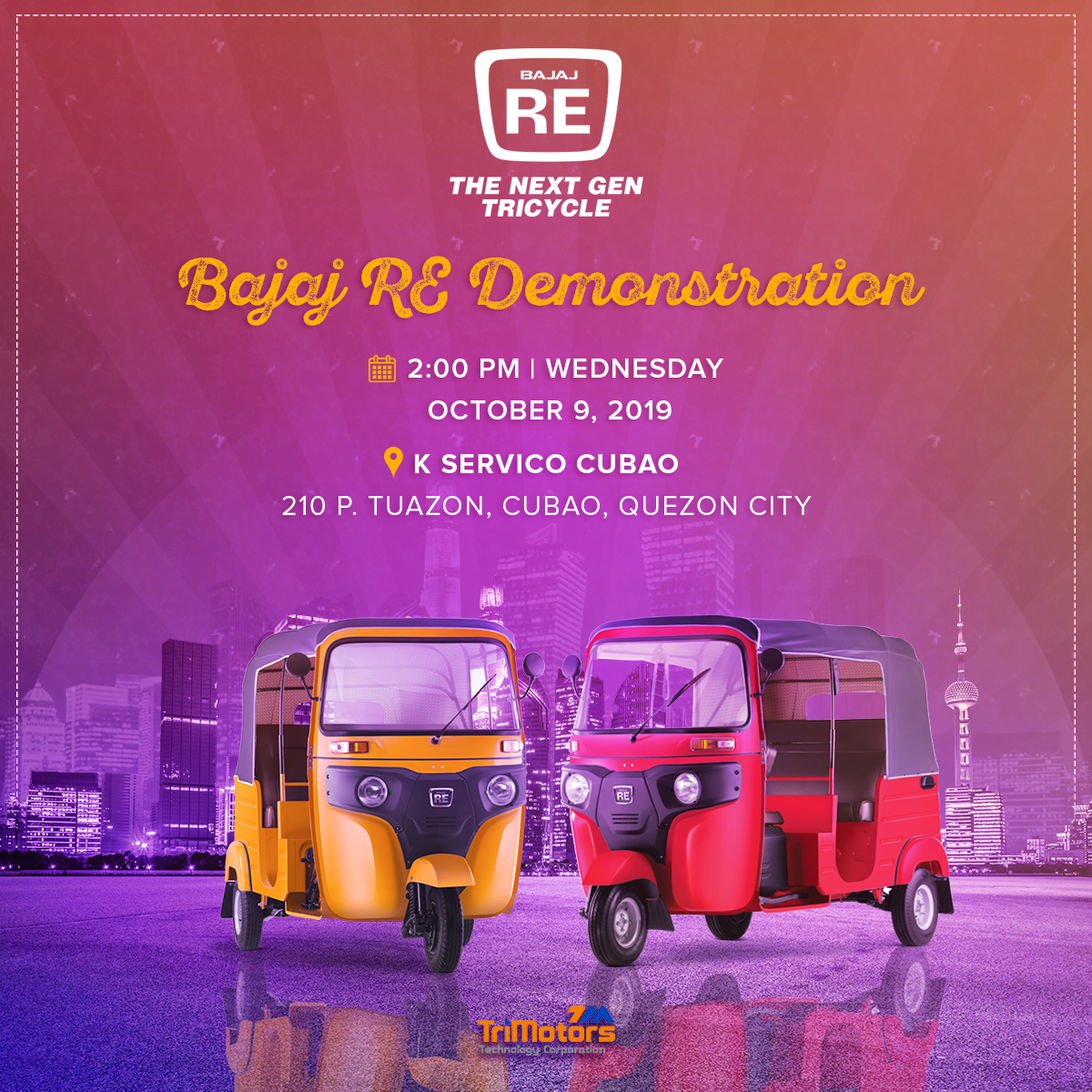 Introducing the Bajaj RE: The Only Three-Wheeler You Will Ever Need

MANILA, Philippines – Step up your world with the Bajaj RE: a three-wheel motorcycle that is revolutionizing the way Filipinos move inside-and-outside Metro Manila!

The Bajaj RE is a low-maintenance vehicle that is conducive for family and personal use, as well as public transport. Because it provides the best mileage and low carbon dioxide emission, without sacrificing performance, the Bajaj RE has fast become an alternative to the traditional tricycle in many cities and neighborhoods nationwide.

“The Philippines is a very unique market for motorcycles, most especially when it comes to the traditional Philippine tricycle. Bajaj RE is the world’s number one three-wheeler, with a worldwide market share of nearly 80% and over 5 million vehicles already on the road,” shares TriMotors Technology Corporation’s Vice President & General Manager, Raul Manglapus III. “Together with our partner Bajaj, we saw the opportunity to offer a better alternative to the traditional Philippine tricycle. So we decided to test the waters and see if we could convince our traditional users to try a new vehicle.”

A Quick Look at the Tricycle Sector in the Philippines

The earliest use of a motorized tricycle can be traced to the years that followed World War 2. Like the jeepney, the tricycle was assembled from scraps left behind by American forces. Over time, the tricycle would soon become a staple across barangays in Luzon, Visayas, and Mindanao, due to its accessibility within urban and remote communities. Then in 1985, the tricycle was finally recognized as a legal mode of public transportation under President Ferdinand Marcos’ Letter of Instruction No. 42.

For millions of commuters, the tricycle is often utilized as the first and last ride of the workday. According to the Land Transportation Office (LTO) in 2012, approximately 658,675 tricycles and motorcycles were operating for-hire in the Philippines. This means that tricycles accounted for nearly 67.9% of all the for-hire vehicles nationwide.

And while the tricycle is an abundant and reliable means of transportation, it is by no means perfect. Because it’s a primary means of transportation for so many people, tricycles are often uncomfortable and overcrowded. Combined with the environmental damage from high carbon dioxide emission, the need to improve conditions for drivers and passengers alike has steadily risen in recent years. This has prompted many to seek safer, comfortable, and more environmentally friendly alternatives.

“We really asked the question: why should our countrymen and women be traveling in a traditional tricycle that is very uncomfortable, loud, hot, and lacks even the most basic safety features when we have a solution that the rest of the world is already using,” says Manglapus. “We as Filipinos have for so many years just accepted that this mode of travel is a way of life. We took it as our mission to offer something better, something that was really built to move passengers in safety and comfort.”

The Bajaj RE: The Future of Commuting

After a slow start following its launch in 2015, there are now almost 30,000 Bajaj RE’s across the Philippines.

“The biggest push actually came when the RE started showing up in the TODA lines and terminals, riders themselves started to choose our ride over the traditional ones,” Manglapus adds. “Although the initial investment cost of the unit may be more than a motorcycle with sidecar, we have found that owners end up making more income because they are the ride of choice and can drive longer hours because the unit doesn’t stress their bodies. Coupled with that, since the unit is made for carrying passengers, maintenance costs are minimal, and durability is superior.”

The Bajaj RE has become a community staple in parts of Mindanao and Southern Luzon, where it is called a ‘Bukyo’ in Batangas and Cavite. This low-maintenance, compact, and durable three-wheel motorcycle can take multiple passengers in a single trip.

“We believe the future is bright in the Philippines,” says Manglapus. “We have exciting plans to further revolutionize the transport industry in the Philippines with many options coming up for tricycle drivers and riders, small businesses, and government agencies alike. Our goals are simple, we want to contribute to the uplifting of Filipinos by offering continuous improvement in the transportation industry.”

About Bajaj RE
Bajaj RE is a name deeply inscribed in every Indian’s heart. After all, it has been a tried and trusted companion since 50 years. By being world’s largest manufacturer of 3 wheelers and the largest exporter of 3 wheelers in India, it has been the highest employment generator. Other than India, the brand enjoys a strong presence across 40 countries. Bajaj is continuously exploring new dimensions to enhance its products and make public transportation easy.