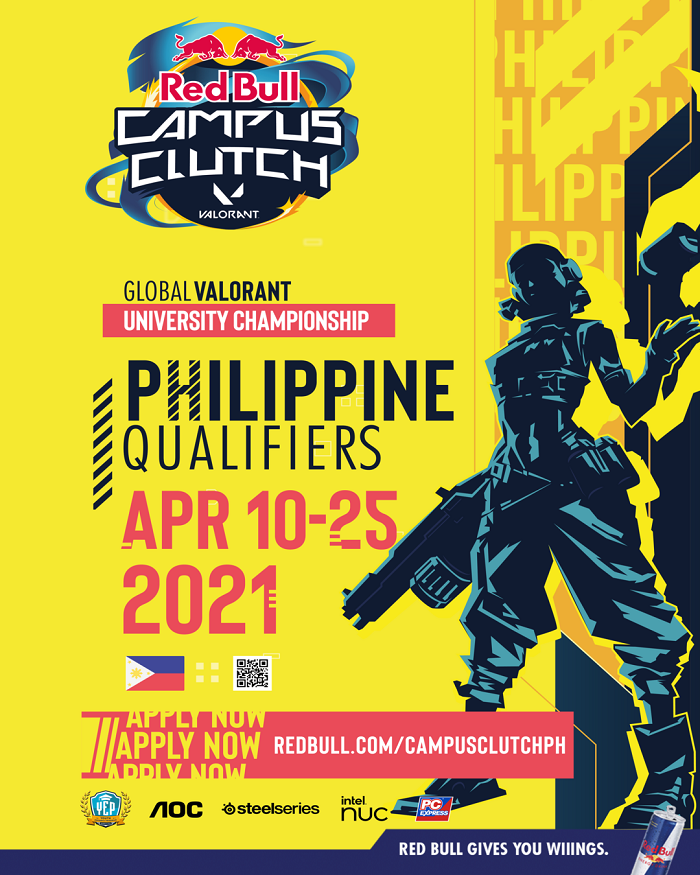 MANILA, Philippines – Red Bull Campus Clutch: VALORANT invites student gamers from universities across the Philippines to compete at the country’s biggest VALORANT tournament. This groundbreaking event is the first of its kind in the Philippines. Students can team up, represent their campus and compete on a national level. Qualifying rounds will take place throughout the entire month of April, with each team vying for a spot at the Regional Finals happening on June 2021.

What is Red Bull Campus Clutch: VALORANT?
Red Bull Campus Clutch offers every student in the Philippines the chance to form their own teams and compete in one of the fastest-growing and most talked about games, VALORANT. The event is held in collaboration with multiple sponsors including AOC, SteelSeries, and Intel NUC. Each sponsor will serve as an event partner, providing cutting-edge hardware for the tournament.

College students in the Philippines ages 18 and above, with their own Steam and Discord accounts, can sign up to compete across several exciting phases.

Following are the qualifying rounds dates:

The best team from each round will move on to the National Finals on May 22, 2021. The winning team will represent the country in the Regional Finals set in June for a chance to compete in the World Finals in July.

Currently, YEP has 80 accredited chapters that are building an inclusive student esports community for future esports talents in the country.

What is VALORANT?
VALORANT is a free-to-play, 5v5 character-based tactical First-Person Shooter (FPS) for PC developed by Riot Games, the creators of League of Legends. VALORANT is optimized to perform on a wide variety of PC hardware, enabling players everywhere to compete. This fan-favorite multiplayer game features a diverse arsenal of weapons, characters with unique abilities, and competitively-turned maps.

Upon its launch in June 2020, VALORANT broke viewership records with 34-million hours watched in a single day. An average of almost 3 million players also logged on every day during the game’s two-month beta-testing period.

Registration for Red Bull: Campus Clutch is now open! Find out more on how to enter and register your team now at www.redbullcampusclutch.com/ph!

For more updates, follow @redbullph and @redbullgaming on social media.

Red Bull gives wings to people and ideas. As a functional beverage, we give wings to people by vitalizing body and mind – supporting their dreams and aspirations through their passions for gaming, sports, and lifestyle.