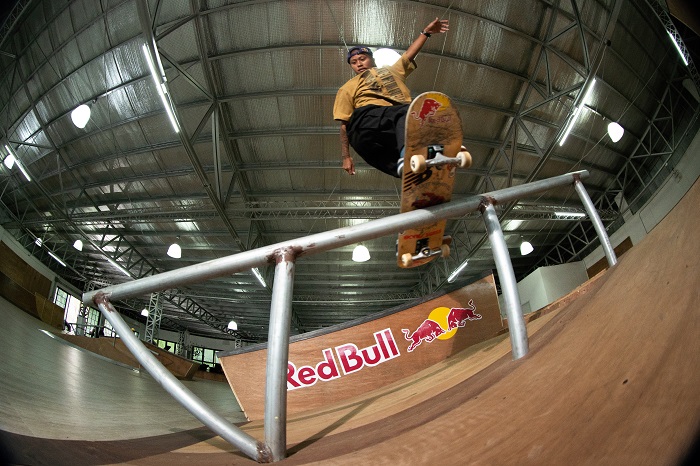 Training in a Custom-Built Facility
The Soul Sierra skatepark was specifically designed by Margielyn Didal, inspired by her experiences training at Red Bull’s facilities in the United States. The skatepark, funded by Red Bull and supported by the National Skateboarding Association (NSA), which provided additional input on the park’s structure, was completed in early 2021. Since then, the facility has provided Margielyn and other national skateboarders the opportunity to continue training in a safe and enclosed environment.

“These new things that Red Bull brings such as the sport science department, physical therapy, and evaluation of elite athletes is a new thing that the sport of skateboarding has never had before,” shares Carl Sambrano, President of the National Skateboarding Association. “It’s a great way to efficiently maximize the potential of an athlete. It’s just a great facility to practice in instead of us spending the money and effort to travel to another country.”

Margielyn Didal currently trains with members of the Philippine Skateboarding Team and is set to compete in the US and Europe before the Olympics.

“It’s such an honor to be one of the skateboarders to represent the Philippines. I’m really hyped!” says Margielyn Didal. “I still can’t believe I have my very own skatepark. It’s a dream come true.”

Now recognized as an Olympic-level sport, the National Skateboarding Association was established in 2019 to enhance the training of Olympic and ASEAN Games athletes from the Philippine skateboarding community.

“The NSA was formed when skateboarding became an Olympic sport,” adds Carl Sambrano. “It is required that every national Olympic committee delegates a national sporting association. It started with the national athletes competing and representing the Philippines for skateboarding.”

In addition, skateboarding was one of the sports that was allowed to resume practice during the pandemic by the IATF (Inter-Agency Task Force for the Management of Emerging Infectious Disease).

“The recent pandemic showed that skateboarding was one of the sports allowed to be practiced after lockdown. From it being illegal in some places to skateboarding facilities being created, it’s now free to skate in the Philippines,” Carl Sombrano reflects. “Regionally, the Philippines is number one. We have the most medals than any other country, in both men’s and women’s.”

Red Bull gives wings to people by vitalizing body and mind – supporting their dreams and aspirations by giving back to the community like skateboarding and helping them to develop and progress their sport.