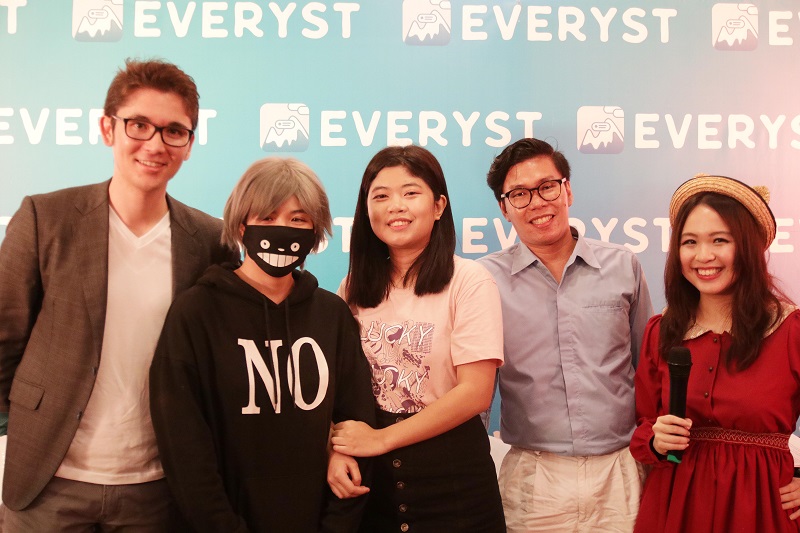 Everyst Launched in the Philippines

Developed in Tokyo, Japan, by an international roster of creatives, Everyst produces stories that are told through a series of character-written tweets that are simultaneously published on the brand’s mobile app and Twitter. Since its launch late last year, the app has attracted a dedicated and passionate audience of readers who regularly follow the many on-going stories published on the app. Popular stories include The Convenience Store (Twitter: @EddieEdEdEd) and Conspiracy Research Club (Twitter: @CRC_Luna)

“We make stories for people on the go,” says CEO, Ben Watanabe. “Everyst characters update their stories on Twitter in short statuses that are easy to read on the go.”

During the press conference, Watanabe introduced Everyst’s newest on-going story, SolarFlare (Twitter: S_F_Nat). Developed under the wing of Masi Oka (of TV’s Heroes and Hawaii 5-0), SolarFlare tells the story of a group of daredevil prodigies who venture into uncharted space to discover new worlds.

“Masi is a lot of fun. He really helps us look at a story from a bigger picture,” Watanabe shares.  “We sat down and brainstormed with him. We talked about what we wanted to do and we landed on SolarFlare.”

Following the brand’s success throughout Asia, Everyst began to venture into the Filipino market through the development of new, original stories co-created by their locally grown talents. The number of talented creators in the country has led Watanabe to consider putting together a Manila-based artist incubator.

“We know that a lot of the big companies come to Manila because there is so much talent here,” says Watanabe. “A lot of the artists that we talk to are working for those companies, but it’s more of a job than getting to build their dreams. We are getting to build our dreams with Everyst, and we want to support storytellers by giving them credit and ownership for their stories.”

Since its launch in the Philippines, Everyst has enjoyed increasing success among readers of all ages. The reception has been so strong that readers have begun to interact with the characters on Twitter. In addition, many fans regularly ask the characters where they can purchase many of the fictional video games and merchandise featured in the stories.

“We love seeing how Filipino fans join in on the fun with the stories being on Twitter,” says Watanabe “The way they comment with friends on what’s happening and sometimes playfully tease each other has been especially fun to see!”

With the reception characters such as Eddie (@EddieEdEdEd) and Luna (@CRC_Luna) have enjoyed since their introduction, it is only a matter of time before these characters find a permanent place in the lexicon of Filipino popular culture.

Everyst is an exciting digital platform that enables readers to experience stories in real time, through “social fiction”. It’s a new approach to manga and light novels where characters post updates on Twitter! Discover fully illustrated stories and come see the world of Eddie (Twitter: @EddiEdEdEd) from The Convenience Store, Luna (Twitter: @CRC_Luna) from Conspiracy Research Club, and many more by downloading the app today on Apple Store and Google Play Store!