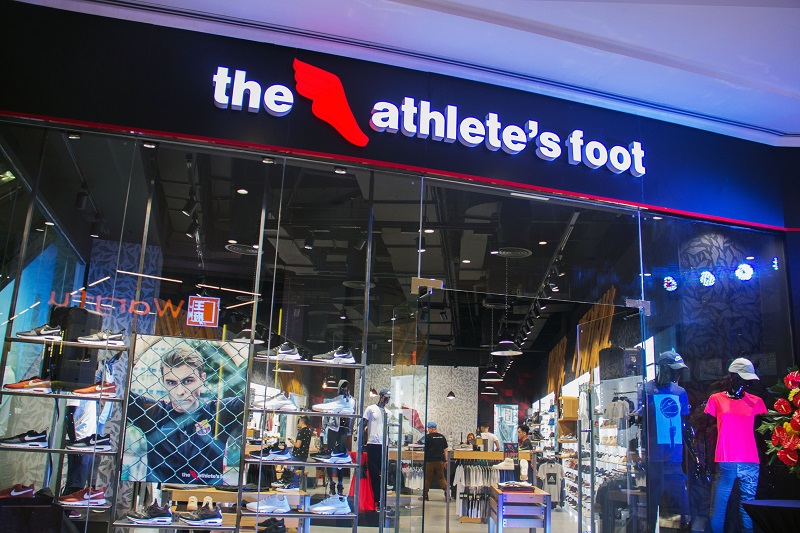 MANILA, Philippines – On Thursday, December 7th 2017, The Athlete’s Foot launched its newest specialty store at Ayala Malls Vertis North, in Quezon City. The premium retail outlet will supply lifestyle-conscious shoppers with footwear and apparel from a number of internationally trusted brands such as Nike, Adidas, and New Balance. The launch is one of three nationwide openings initiated by The Athlete’s Foot this December, with stores just launched in Bataan and Sta. Rosa, Laguna.

Since its inception in 1971, The Athlete’s Foot (TAF) has become the global retail leader in high-quality footwear and sports apparel. The retail destination has garnered the support and enthusiasm of athletes and consumers in over 518 stores across the world, in 29 countries. In the Philippines alone, TAF has launched 17 shops and is looking to dominate the local market with 7 concept specialty stores in Metro Manila.

“The Athlete’s Foot is the original sneaker store in the United States. And now, as sports is becoming an important part of fashion, TAF is transitioning to support the everyday young adult who is into sneakers, basketball, running, and lifestyle,” shares Jose Cervero, Marketing and Merchandising Manager for The Athlete’s Foot.

The newly-launched Vertis North branch highlights TAF’s shift from sports apparel to lifestyle-centered fashion choices, including sneaker culture, streetwear, and athleisure fashion. In addition, the store showcases a number of reintroduced collections and highly coveted footwear that is sure to excite enthusiasts and collectors. The Athlete’s Foot’s private streetwear collection is also available for purchase at this branch.

“We are proud to say that we are really trying to cater to men and women,” says Cervero. “Most sneaker stores are very masculine, and through our new stores, we try to be more balanced. We want our stores to speak to both men and women.”

Through their launch at Ayala Malls Vertis North, The Athlete’s Foot is poised to become one of 2018’s major trendsetters. In 2017 alone, the brand launched 8 stores nationwide, including 3 franchise stores. As 2018 approaches, TAF is looking to expand with seven 7 new lifestyle stores.

“We are really excited about the prospect of this mall,” says Cervero. “We’ve been itching to open in Quezon City, and Vertis is the perfect place to start in the North. In 2018, we are opening more stores in key areas in Metro Manila and slowly expanding into the countryside.”

In addition, The Athlete’s Foot will continue to push their e-commerce platform. Available to users all over the Philippines, the newly integrated platform will connect online shoppers to every store in the country. For sneakerheads in the provinces, this service will provide them with access to the latest and the rarest goods in the market.

“We want to serve the sneaker needs of Filipinos nationwide,” Cervero adds.

If there’s anything sure, it’s that The Athlete’s Foot is ready to meet the needs of today’s active and trend-conscious consumer.

For more information about The Athlete’s Foot, check out: http://www.theathletesfoot.com/

ABOUT THE ATHLETE’S FOOT

In 1971, Robert and David Lando opened the first The Athlete’s Foot store in Pittsburgh, Pennsylvania. Back then, it was the first athletic footwear specialty store of its kind in the United States. It later became the world’s first franchisor of athletic footwear, with over 200 domestic stores by 1978. That same year, the striving American chain went international, opening a store in Adelaide, Australia. Today, The Athlete’s Foot is still recognized as one of the world’s leaders in athletic footwear, continuing its legacy and commitment to proper fit and quality customer service. In 2012, The Athlete’s Foot was acquired by INTERSPORT International Corp. (IIC), based in Switzerland. The Athlete’s Foot continues to grow, and is opening even more stores in more countries every year. As it grows, it continues to empower people everywhere to embrace their very own sport with style.